Andrew is a Climate Champion volunteer with the Living Lighter Project. He shares his thoughts on his personal experience in home energy, and the Scottish Government’s recent consultation on energy efficiency in owner-occupied homes.

In 2019, the Salisbury Centre attracted a Grant from the Scottish Government’s Climate Challenge Fund. The Grant was for the Living Lighter project which aims to encourage people to live in a more environmentally friendly way, particularly with regard to climate change. As part of one of the outcomes to improve energy efficiency and insulation of the Salisbury Centre building, new double-glazed windows, some underfloor insulation and draft proofing was recently completed. 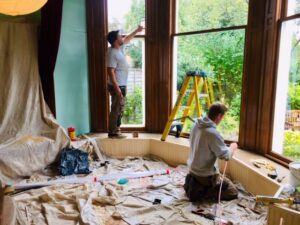 The Scottish Government recently posted a discussion document on its website prior to drafting a new law. The document is: “Energy efficient Scotland, improving energy efficiency in owner occupied homes.” This sounds like a rather dry subject but will probably be the most intrusive piece of legislation I have seen in my lifetime. They make the point that a climate emergency has been declared and Scotland has signed up to reducing emissions and to reducing fuel poverty. 62% of Scottish housing is owner occupied. The considerable improvements in Local Authority housing insulation and regulation of the private rental sector has had only a modest impact on the 6MTCO2(e) emissions from Scottish housing because most is owner occupied. Housing accounts for 15% of all Scottish CO2(e) emissions.

The Scottish Government proposes that private residential property should meet a standard of energy efficiency equivalent to EPC (Energy performance certificate) level C by 2024. If planning permission for a major upgrade of a home is made after 2024, then this must include upgrading insulation and other facilities to level C for the whole house. If a home is to be sold after 2024, then improvement to insulation to EPC level C must be achieved within one year of the sale or else there will be a penalty which may be recurring. Recently built houses are fairly well insulated. There are many older homes in Scotland and in 2017, only 38% of Scottish owner-occupied homes met the EPC level C standard.

Edinburgh has many attractive older buildings. Insulation of older homes is generally poor. 5 years ago, I bought 2 small rental properties in Edinburgh. They are both stone built flats around 120 years old. I did my best to bring these properties up to a good standard of insulation and energy efficiency. This included some wall insulation, double glazed windows and energy efficient boilers, lights and appliances. One flat managed an EPC level B and the other only level C despite my best efforts. For rental properties, recent legislation will require level B by 2040. EPC level C is not easy to achieve and will require major upgrades at owner’s expense of all older homes. The value of older homes will only be retained if insulation is radically improved in the near future. The impact on the value of the Nation’s housing stock will be considerable even without factoring in the economic consequences of Covid-19.

The Scottish Government’s agencies are geared to offering advice to local Councils and to people in financial difficulties. However, from personal experience as a property owner expecting to pay for renovations, I encountered difficulties even with the advice from agencies such as Home Energy Scotland. For example, none of the recommended companies would advise or work on complicated loft insulation in my old house. 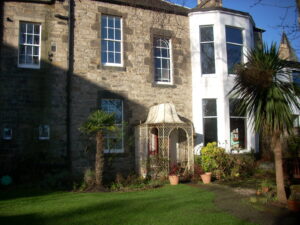 Extinction Rebellion calls for more ambitious emissions targets, expressing that the current targets are not enough from the perspective of the planet. The practical and financial difficulties that will be imposed by the requirements of the Scottish Government, on private owner-occupied buildings are considerable even so. The Salisbury Centre is an old Edinburgh building. The renovations that have been done are very useful to showcase some of the changes that will have to be made to private housing stock in order to achieve a level C EPC certificate. It is estimated that the replacement boiler, double glazed windows and draft proofing will save 9.4 tonnes of CO2(e) per year. 9.4 tonnes of CO2(e) is a substantial saving. Ofgem, the Government energy agency, revised its published typical values for energy consumption in the home in 2017. They published high, medium and low levels for domestic gas consumption. High was considered to be anything over 17,000 kWh per year. Using UK Government figures published in 2017, this converts to 3,060 tonnes of CO2 (e). In other words it is expected that the renovations made will save emissions equivalent to 3 large inefficient older houses. The developments will be very interesting to anyone who plans to improve insulation in a traditional older home.

Being Elder Being Older

Rising in the body  (Somatic movement)