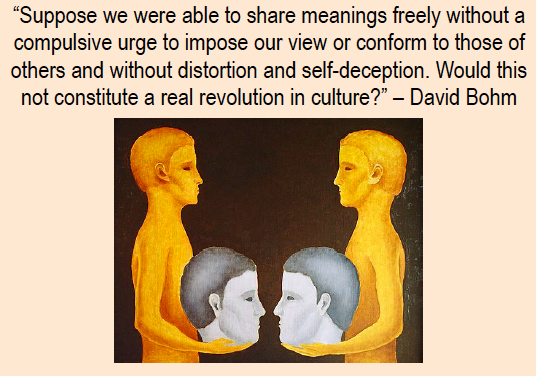 Suggested donation – £10 (on a pay what you feel you can afford basis). Part of the donation will go toward supporting the Salisbury Centre to continue its service within the community.
Please donate through  https://www.salisburycentre.org/donate.
NOTE:  as a Reference please add “BOHM” after your name
Facebook Group Event page here: https://www.facebook.com/events/235134130934538/
——————————————-
Additional Background
Bohm was concerned about the way humans were talking to each other – issues about politics, the environment, religion and philosophy were more divisive than ever, and discussions about important issues caused us to be defensive and aggressive. He died in 1993, and things have arguably gotten a lot worse since then, with our world becoming more and more polarised, and with an apparent decrease in empathy and compassion for others.Bohm was a physicist who also worked closely with educator Jiddhu Krishnamurti. Bohm’s research in physics led him to the conclusion that the universe was not separated into many smaller parts, but that everything existed as one. Humans are thus also a part of this unified existence, but we make mistakes in our thinking when we consider ourselves as separate from others.